Looking Back on the Rabbi Relay Ride 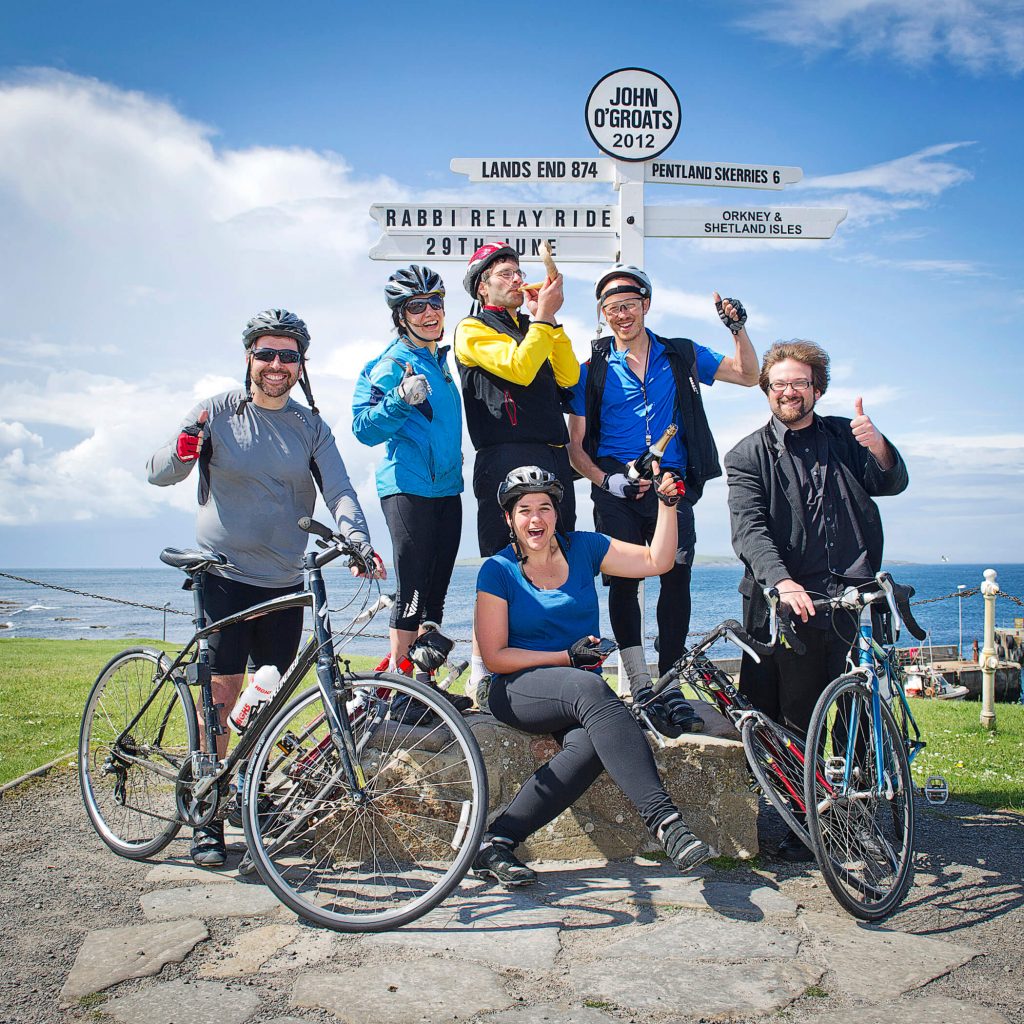 Cycling 1400 miles through Britain with 14 Rabbis sounds utterly ludicrous, but it happened exactly ten years ago.  Gefiltefest’s so-called Rabbi Relay Ride was the first – and probably last – cross-communal bike ride from Land’s End to John
o’ Groat’s.  We set off in early-June 2012 and, as the organiser, I look back with
both great pride and great regret.

There is pride that we pulled off a preposterous escapade and raised £30,000 for
charity; but there is also regret that it could have raised more money; that it soured certain relationships; and that it failed to become an annual fundraiser.

I now appreciate that it is not enough to have an idea: without support and
structure the greatest schemes fail. I now believe that the most sustainable
enterprises are those that involve an enthusiastic team from the outset. Anything which rests on the shoulders of just one enthusiastic entrepreneur will almost inevitably implode when that person moves on.

There is an exception in cases where a passionate successor is carefully cultivated: Limmud is a perfect model of a not-for-profit endeavour
that brilliantly recreates itself each year with enthusiastic new recruits who stand alongside the long-standing supporters.

The Rabbi Relay Ride story started at London’s JHub in 2011. In a meeting to
discuss social action in the Jewish community David Brown, who was then
working as the coordinator of the Jewish Social Action Forum, raised the
subject of the ‘Year of the Bike’, a central part of the Board of Deputies’ Big
Green Jewish campaign. One plan was a video of different Rabbis singing
Queen’s I Want To Ride My Bicycle against a green screen. The final cut –
filmed edited by Oliver Marcus and David Brown – was a masterpiece.
On the spur of the moment, despite already having too much work on my plate,
I suggested recruiting Rabbis that could each ride a one-day leg of an epic Lands’ End to John o’ Groat’s bike ride. If we could find fourteen rabbis, each would only need to cycle around 80 miles. No one Rabbi would need to spend a
long time away from home. Each Rabbi could each appeal to their communities
and fundraise for a charity of their own choosing – but at the same time they would donate a percentage of their funds to the food charity Gefiltefest that I had started a year before. I had taken a sabbatical, had no children, and nothing tying me to London.

Three Rabbis in the meeting immediately volunteered to take part: Jeremy
Gordon, Natan Levy and Neil Amsywch. How hard could it be to find eleven more?  I guessed it would also be relatively easy for any congregational Rabbi
to raise £2,000 in sponsorship, and Gefiltefest could additionally appeal to
its mailing list for donations. I proposed a random, and overly-ambitious, target
of £50,000.   I didn’t consider the enormous amount of time that the endeavour would take to organise, or the significant impact on other work. I
also didn’t think about possible tensions between Rabbis from different
backgrounds.

That evening I told my then-fiancé (now wife) Rachel the idea. She told me I was mad. At a book launch a months after the social action meeting, I heard the then Chief Rabbi Sacks say, ‘it’s the messhugenahs who make things happen’. I
felt vindicated. Being a bit eccentric might actually be a good thing.

I hoped to make the event cross-denominational, and had an idea of a rabbis,
imans and priests could all ride together, but that proved a step too far.

Still, I did stage a photo of Rabbi Harvey Belovski, Rabbi Shoshana Boyd Gelfand and Rabbi Eiran Davies on a trandem bike at Ivy House, the then home of the London Jewish Cultural Centre. I borrowed a bike used by the Goodies that was impossible to control, add the three rabbis almost careered down the slope into a pond.
After plenty of sleepless nights of preparation, and the third Gefiltefest food festival, we set out in June 2012. Rabbi Harvey Belovski blew his shofar outside the Land’s End visitor centre to mark the start of the ride. Once we set
off, Rachel and a good friend Tarryn Klotnick helped to keep the show (literally) on the road. Without their support I would have had a nervous breakdown. We also had the help of different Jewish communities in England and Scotland.
Three weeks on, with 1400 miles under our belt, Rabbi Natan Levy blew the same shofar at John O’Groats. I kissed the ground. Along the way, twelve other Rabbis pierced the air of various hotel car parks at horrendously early hours before we started our cycling for the day.  We rode in June, to get the maximum amount of daylight and riding time, but sometimes had to cycle through dreadful conditions to be sure we stuck to our schedule.

There is a good chance you never heard about the event: we had no budget for press, PR or any type of marketing.  In fact, we had no budget for food, transport or accommodation either.  A friend at the Sun newspaper bellowed at a contact at the Volkswagen press office and secured us a free support vehicle for three weeks (nicknamed the ‘Noshwagon’).

My aim was to raise as much money as possible, spending as little as possible.

We did manage to get a good amount of press coverage in the Jewish media and
The Times newspaper.  I remember cycling past a radio presenter, coming to a quick stop, and organising an impromptu interview on a local BBC channel. We
also arranged to have some brilliant Jewish cooks send Kosher food packages to
us in the most remote outposts.

The Rabbi Relay Ride did raise a great sum of money and, in that respect, it was a great success. For some of the riders it was a transformative experience and I would assert that it had a significant and lasting impact: one participant became a keen bike rider and, ten years’ on, he looks healthier than he did before. The majority of the riders enjoyed the event and said they’d do it again in a flash.

But at least one of the participating Rabbis probably looks back on the escapade
with horror, and I think the experience damaged our relationship. The key
challenge was that we did not have the time, infrastructure or resources to plan
everything perfectly.

Even basics had to be improvised as we cycled: on one occasion we were cycling northwards and no idea where we were going to sleep that night.

On another Tarryn reprimanded me for cycling one-handed up a mountain in
Scotland while I was dictating a blog post to a freelance typist in London. There
were entirely unexpected problems: one of our support drivers drove under a
low bridge in Scotland, ripped the roof rack off and decapitated our spare bike.

Most charities wisely outsource the organisation of such rides to external
companies but, by doing so, they greatly reduce the profit they make. We
pushed the money-saving ethos to the limit (and perhaps beyond). And here’s
the crux: if we had spent more time preparing the ride then it would have been a more professional, slick operation – but if we had spent more time preparing it would have never happened.

There was one summer when we had the momentum, enthusiasm and freedom
to pull off a caper. I don’t think it would ever have taken place if we had waited.
I understand the need for patient, methodical planning, but at the same time I
cannot resist getting enthusiastic about shiny new things. Creative people are
rarely lovers of administrative details and logistics (and vice versa).

The Covid pandemic has underlined how important it is to act when possible.
We have to live with imperfection. My key, regrettable mistake was not
involving enough people from the outset: unless enough people share a vision
and a founder’s enthusiasm then the burden falls and ultimately flounders, on
just one person. Ten years on, with more wisdom and weight under my belt,

I’d consider trying to assemble another team for a coast-to-coast rabbinical
fundraiser next summer. This time I’d even book the food and accommodation
in advance.  Anyone game? Get in touch.

Michael Leventhal is the publisher of Green Bean Books and Greenhill Books.
The full blog from 2012 can be see here: https://rabbirelayride.wordpress.com