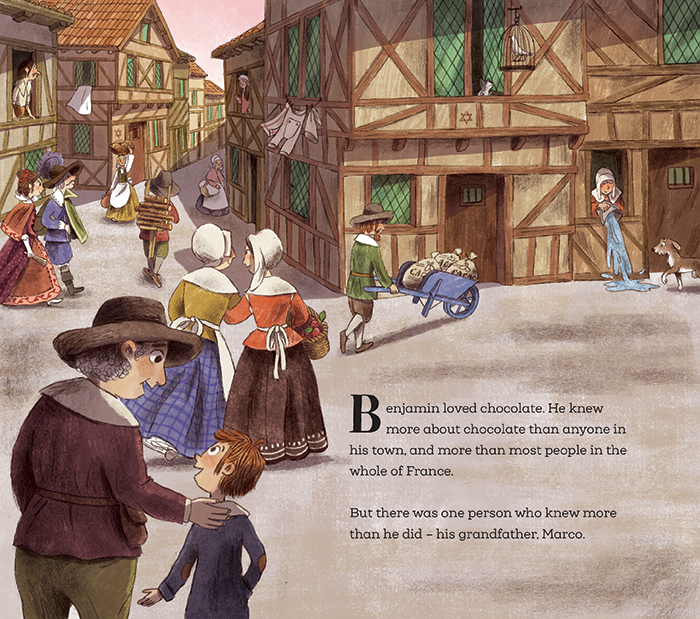 Benjamin loves chocolate. He also knows a lot about it. But one person knows more – his grandfather Marco, otherwise known as the Chocolate King.

Benjamin’s family arrive in France at the beginning of the 17th century, having escaped the Spanish Inquisition. They have nothing but the clothes on their backs and as many cocoa beans as they can carry.

Back in Spain, Benjamin’s grandfather Marco was El Rey de Chocolate, famed for his delicious hot chocolate drink, a recipe he claims he learned from an intrepid Spanish explorer. But now, if the family are to make a living, they must persuade the people of France to fall in love with Marco’s strange mud-coloured concoction. Benjamin is desperate to help, dreaming that he might grow up to wear the Chocolate King crown.

Then, one day, Benjamin causes chaos in the kitchen. Covered head-to-toe in chocolate, he stumbles into the street and straight into the path of the real King – the King of France.

Finally, the family get the breakthrough they need, and all of Benjamin’s dreams start to come true.

Michael Leventhal is the publisher of Greenhill Books and Green Bean Books. The Chocolate King is his first book for children and won a PJ Library Author Incentive Award.

Previously he founded Gefiltefest, a Jewish food charity which organised Europe’s biggest Jewish food festival. He is co-author of Jews in Britain and edited The Hand of History (illustrated by Chris Riddell). He eats a lot of chocolate.

Laura Catalán has illustrated numerous fiction books and educational material for Spanish, UK and US publishing houses. Her picture books include Two Peas in a Pod, The Naughty Spectre and Daughter of the God Sülde.